As  my beloved home country, Turkey, has just voted “yes” on proposed constitutional changes that made current president Recep Tayyip Erdogan pretty much president until 2029* and gave him extensive powers that will (I guess) enable him to enact all the policies he did not have the resources to enact  – despite being in politics since 1983, an elected official from 1994 to 1998, and controlling the executive branch since 2002, controlling the executive branch with little to no opposition from the legislative branch since 2007, with little to no opposition from the judiciary branch since 2010.

But anyway, I digress. Where was I? Yes, Turkish brand. So, what will happen to the Turkish brand? Well, Turkish brand will both benefit from the results and be damaged, almost, beyond repair. 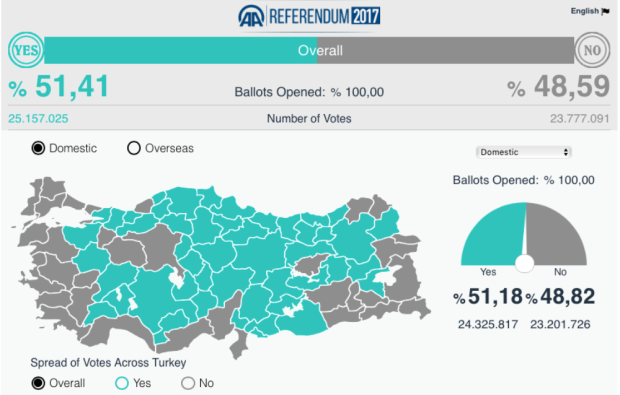 At least they can spell “referendum”

Turkish brand has three main audiences. The domestic audience, albeit not as important as foreign audiences for nation/place branding research, is part of Turkey’s intermistic understanding of foreign policy. There are even public diplomacy projects that exclusively target citizens. Erdogan has already labeled anybody that does not support him as terrorists, and either used the failed coup as an excuse to detain/arrest/fire them or more subtly forced them to flee the country.

Life is not likely to be easy for the people who voted “no” in the country. From a pragmatist political communication people, these individuals were already “tough” targets. They were not supporters of Erdogan or his vision of Turkey. Erdogan, by calling them terrorists among other more vengeful actions, made it clear that he did not see them as important audiences. This particular group’s (domestic opposition) impact on Turkey’s brand will be based on their ability to organize and to move forward. They might be a beacon of hope for Turkish democracy if their peaceful protests bring Erdogan to re-question some of his stances (though I think it is more likely for each Turk to receive his/her own unicorn than Erdogan having a milder stance on anything).

The second audience, the Western audience, has already been freaking out about the recent developments in Turkey. The referendum was seen as the last straw, earning itself a six-minute segment in The Daily Show. Steven Cook perfectly summarizes the significance of the ballot by arguing that “Turkish Republic has always been flawed, but it always contained the aspiration that […] it could become a democracy. Erdogan’s new Turkey closes off that prospect.” From a Western perspective, this signals Turexit**. Erdogan’s awkwardly tense relations with the Western world were approved by the Turkish people. Even though I highly doubt there will be major institutional changes (such as Turkey leaving NATO or even giving up EU negotiations), there will be minor policy pivots (such as acquiring military equipment outside NATO standards or further ignoring EU/EC regulations).*** This particular audience was also not a priority item in Erdogan’s agenda. Erdogan’s anti-West rhetoric has been on the rise.

Then there is the third audience – the conservative Muslim population across the world. For this particular group, Erdogan is the equivalent of a Karl Marx or a Mahatma Gandhi. Akin to a post-colonialist discourse, Erdogan is the response given to “secular” bureaucracies, Christian values, and dirty politics. The referendum results, once again (as I seriously forgot how many local/national elections and referendum votes Erdogan has won), show that Erdogan is “the man” for this discursive position and Turkey is “the model” to follow.

I should not that the Turkish model I refer to here has little to do with the Turkish model that was discussed a few years ago. Turkey is not admired because it is ability to melt democratic values with Islam, but rather because the conservative views finally became strong enough to rebel against the Western hegemony and secular bureaucracies.

In summary, Turkish brand will probably have a stronger country of origin impact and a destination appeal. However, the audience will be limited.

** I do sincerely apologize for the neologism.

*** For instance, as I was writing this blog post, Turkey called OSCE’s election observation report “unacceptable”.