There is a fake Germanesque town in Northern Georgia, called Helen. After hearing about the city, I had to check it out for myself. I mean, when somebody tells you that there is an Alpine town in the South(ern part of the US), you have to see it. 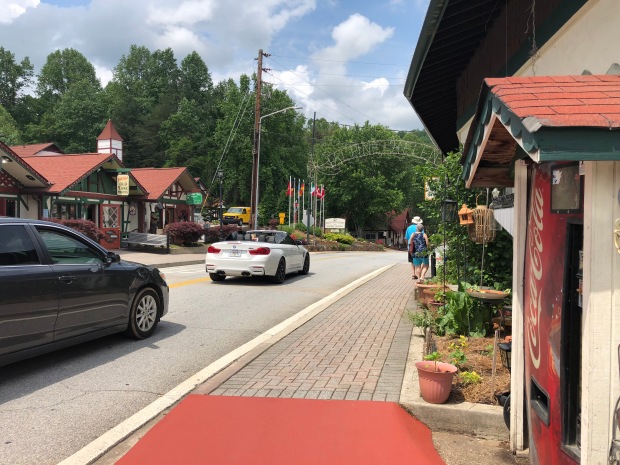 One of the side streets in Helen, GA

My trip to Helen was also a part of my field research for my ‘Place Branding and Development in Exurban Environments’. Therefore, I was not planning to blog on my observations. But Helen is currently facing flash flood risks. I believe the city became a great case to discuss the difficulties of balancing place branding and development.

For the sake of simplicity, let’s assume place branding is what you do to attract outsiders, mainly tourists, to your city while place development is what you do to satisfy the needs of your residents. If you invest all your resources on the former, you will end up with a Disney World-ish city where one can buy all types of memorabilia but cannot find any household items. If you choose the development aspect, you might end up with a well-functioning city that nobody wants to visit, which creates budgetary concerns. In 2017, American domestic tourist spending was valued at $718.4 billion, creating nearly 9 million jobs. Common sense (as well as various scholars including Andrea Insch and Magdalena Florek) dictates that we should balance place branding and development.

Helen is an incredible exception to this wisdom though. The decision to brand the city as an Alpine town was a necessity. Helen became a settlement during the Trail of Tears during which Native Americans were forced out of their lands and replaced by white settlers. Until 1960s, the city did ‘okay’ through its timber industry and gold miners. After depleting these natural resources, people started to abandon the region. Here is how the Chamber of Commerce tells the rest of the story (emphasis added):

Helen’s evolution into an alpine village began in 1968 when a group of local business men met to discuss ways to revitalize their town. They approached a nearby artist friend, who had been stationed in Germany. He sketched the buildings, added gingerbread trim, details and colors to the buildings, giving an alpine look to the entire town. In January of 1969, business owners and local carpenters began turning ideas into reality and all downtown stores were renovated. Faces of buildings were painted with scenes of Bavaria and North Georgia, mirroring the migration of early settlers.

And this is the city we ended up with: 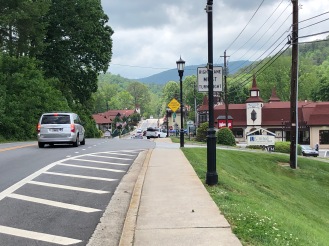 After a rainy weekend, Chattahoochee River started giving visitors less of a “let’s go tubing” vibe and a little bit more “maybe they should have invested more on infrastructure”.

Is it possible to balance between place branding and development in emergency cases such as Helen? The short answer is yes, it is. Even if a city decides to completely revamp itself and use tourism as its main industry, it is possible to do so while acknowledging the needs and expectations of locals.

The longer answer requires a dive into the role of environment and sustainable tourism – Helen is in driving distance to metro Atlanta, as well as bordering cities in three states. It has access to a great market. Yet, Helen is also a city that had to reinvent itself once after its economy almost collapsed because it was not diversified. Currently, it is banking on beer-loving tourists and hikers (as Helen is close to a few state parks). This particular strategy is equally unsustainable.

In short – branding is good, especially if you have access to a solid market. But if branding does not go hand-in-hand with development, local governments will find themselves in trouble.