By now, most of us have heard about the tension between Turkey and the Netherlands (and for those who have not heard about it, CNN has a nice summary). As both countries are heading into elections, they once again showed us that the combination of “irrational voters” and “universal suffrage” might lead to really crazy rhetoric. I argue that this focus on “winning” the elections also influences how Turkey and the Netherlands portray the events in the international arena. And when everybody tries to win the game of soft power, everybody loses. Here is why and how: 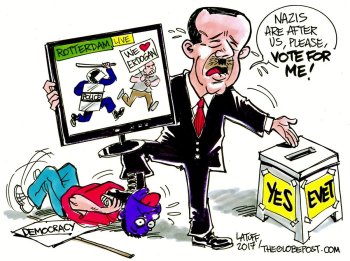 As I argued in an earlier post, soft power should not be seen in a competitive lens. Yet, there are various instances in contemporary politics where ideologies clash and the belief that there can be only one prevails. The discourses seem incompatible, therefore, one will be right and the other one will be wrong.

Take the Dutch-Turkish tension for instance. Turks try to portray the Dutch as the evil party* that blocked a minister from entering the country and another from meeting with the consul-general. The Dutch police attacked Turkish protestors with dogs and horses. To make things sound more ‘reputable’, the Turkish side also throws in buzzwords such as “diplomatic traditions”, “the Vienna Convention”, “diplomatic immunity”, and “freedom of travel/movement.”

3/ The decision by the Dutch Govt to ban Turkish ministers and use force against peaceful citizens mark a dark day for democracy in Europe.

The Dutch, on the other hand, accuse the Turkish side for trying to further divide its citizens of Turkish origin. They also voice their discomfort with Erdogan calling these individuals “our citizens”. Moreover, they do not want their country to become a part of Turkish domestic politics.

Obviously, these two narratives about the same event cannot co-exist. One needs to win, and one needs to lose. However, there is another option: they can both lose. The desire to use foreign affairs to gain power in domestic politics is easily visible in both parties. For European and North American audiences, this is – at least – concerning and raises concerns about the future policies of both countries.

Go away and never come back @drbetulsayan and take all your Turkish fans from The Netherlands with you please. #byebye https://t.co/FLKFNX2XGm

Erdogan’s track record is well-known and feared by many. Wilders’ achievements in his relatively shorter career in politics, his hair-style, and his Twitter account (which is hopefully run by a 15-year-old) already signal the rise of a politician that will make political satirists happy and the rest miserable. For external audiences – for those who are not trying to make up their mind between Turkey and the Netherlands – this zero-sum approach to soft power results in a lose-lose situation for both countries.

Soft power is not an instrument to manipulate and win the support of masses, it is an approach that values listening, understanding, and co-operation.

* Erdogan actually called the Dutch authorities “Nazi remnants“. I sincerely believe this is based on Turkey’s surprisingly light-take on the atrocities of the World War II. I don’t think Erdogan or his advisors are aware of the scope of this particular accusation. I personally have witnessed our (Turkish) ignorance regarding not only the Holocaust but also its impact on contemporary European daily life and political discourse.