There is a new campaign (well now a couple of months old), Conflict of Pinterest that makes use of social media, citizen involvement, and some kind of measurement metrics that aims to find the answer for the million dollar question: “What is the most beautiful country in this world?” The campaign brings all the buzzwords of public diplomacy studies – therefore requires a closer look! 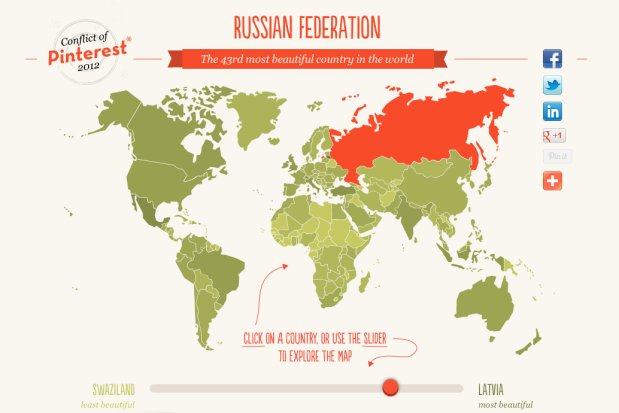 Let me back up a little bit. Visual.ly is a new web platform where creative people share their infographics and data visualization projects with the public. Pinterest is a virtual pinboard where users can pin the photos they find on the internet. And as far as I can see, First Choice, a travel agency, bring these two new social media platforms together in their Conflict of Pinterest 2012 project, and launch (what I would like to call) their unintentional public diplomacy campaign.

Practically, Conflict of Pinterest acts as an aggregator for social media data, and encourages people to voice their opinion.

Questions I have in mind for the project (and hopefully questions I might answer when the voting period ends):

One thought on “Unintentional (public) diplomacy: Conflict of Pinterest 2012”