I saw this article yesterday. As far as I can understand the advisor to the advisor to the Prime Minister said: “Turkey should start to invigorate Turkish immigrants in Europe as an effective diplomatic tool for EU membership. They have been in Europe for 50 years, but Turkey has not managed to mobilize them.” (Please click here for the full article)

The idea is great. We are talking about 5 million people from Turkish ethnic origin in Europe, over 2 million people in Germany! It is not possible to disagree with what the advisor to the advisor to the Prime Minister tells us: Turkey has neglected its nationals living abroad for decades. I highly appreciate this belated attempt to mobilize these people. At the end of the day, these people are in interaction with foreign publics on a daily basis. In marketing terms, they are walking bill boards.

But, as far as I can see there are three important problems due to the fact that the action came too late and too little. (Although I highly appreciate the attempt, the statements of the advisor to the advisor to the Prime Minister – which were published only in one English language Turkish newspaper – are not enough to claim that public diplomacy is at the top of government’s agenda).

A recent study showed that Turks are the least integrated minority in Germany!

Also, this video-report shows how Turks try to keep themselves away from the German community in general. There are individual exceptions to this generalization, naturally, however, the majority of Turkish community is not integrated with the local community

In fact, Turkish government never wanted these people to integrate with their host societies. Let’s look at the following article in 1982 Turkish Constitution:

The main aim of the government was to keep Turkish nationals working abroad as connected to the home country as possible and to support their return home. In other words, who didn’t see this lack of integration coming?

I had the opportunity to spend a week in Germany in 2005. I went to Frankfurt and Essen with a friend, where we experienced this lack of integration first hand. I stayed with a Turkish family. The father was a first generation migrant, with a bachelor’s degree and a fluent German. The mother was second generation, in English, Turkish and German. The children were all enrolled in German schools and were successful. Although this situation describes a level of “integration”, during our stay, we never had to speak a word of German or English and never shopped at a non-Turkish store. And, well, our opinions about getting married and moving to Germany were asked a few times. 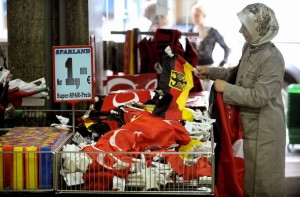 And Turks are not German’s most favorite minority mostly due to the fact that Turks are living in their closed chambers which are located somewhere in between 1960s’ Turkey and contemporary Germany.

Let’s assume that Turks are well integrated to the German society and have the potential to influence the German public opinion. How are we supposed to create a diaspora power from the masses of people? In fact, the very same news article quotes Cenk Alican saying “There are dozens of Turkish foundations in Germany’s big cities, but due to ideological differences and problems between the heads of NGOs, they cannot unite around common goals.” So, who will create a strategy? How will these organizations and individuals act in coordination?

Thus, we have (in metaphorical sense) broken billboards in the unseen parts of the cities with different messages written on each and every one of them… We have miles to go before we can start implementing public diplomacy projects through the migrants in Europe.

One thought on “Too Late, Too Little: Turks in Germany for Public Diplomacy”